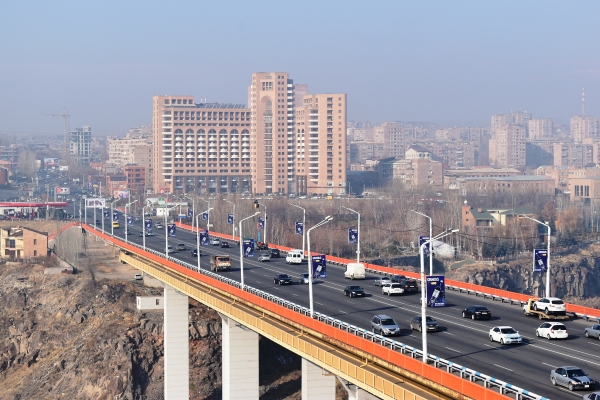 Street lighting in Yerevan, the capital of Armenia and the signatory of the Covenant of Mayors, is rapidly being changed thanks to large-scale and consistent actions aimed to replace old street lamps with new energy-saving LED lamps, implemented by the Municipality of Yerevan with the support of the United Nations Development Program in Armenia and other partners.

The beginning of modernization of street lighting systems not only in the capital of Armenia, but also in other cities was launched in 2014 as part of the UNDP-GEF Green City Lighting project, that was aimed to save energy and reduce greenhouse gas emissions by increasing the energy efficiency of urban lighting systems through the implementation of municipal investment programs and national policies.

Thanks to UNDP financial and technical support, already in 2015, the first major pilot projects were implemented in Yerevan to replace 959 old street lamps with 684 modern energy-efficient LED lamps.

Optimization of the number of installed luminaires and their technical indicators made it possible to reduce the installed capacity of the systems by 65%, achieve a reduction in annual energy consumption of 620 MWh / g and reduce greenhouse gas emissions in the amount of 275 tCO2 / g.

In order to facilitate the replication of the used energy-saving technologies, as well as to ensure the sustainability and independence of the modernization process, in the pilot cities, within the framework of the project, municipal trust (off-budget) revolving funds were created and the largest one was established in Yerevan.

Funds generated from savings achieved through the implementation of first pilot projects and other revenues can be spent solely on the design (10%) and implementation (90%) of energy efficiency projects in the field of street lighting or other sectors of the municipal economy.

In particular, at the expense of revolving fund and project co-financing, from 2016 to 2018, an additional 1129 old street lamps were replaced with 676 new LED lamps in Yerevan, that reduced energy consumption by another 700 MWh / g and reduced greenhouse gas emissions by 312 tCO2 / g.

Remaining true to the strategy for introducing energy saving and reducing greenhouse gas emissions, that was set out in a number of documents, and in particular in the Sustainable Energy Action Plan (SEAP), developed in the context of the Covenant of Mayors, Yerevan continued cooperation with UNDP in the framework of the new project “Support to Armenian Communities on the adaptation and implementation of smart climate solutions.”

The fundamental difference of the new phase of cooperation is the condition to finance all activities (purchase and installation of new fixtures, replacement or repair of poles and brackets, etc.) at the expense of the revolving fund only, while UNDP continues to provide exclusively expert support in auditing of lighting systems, preparation of technical specifications and design documentation, as well as in the process of purchasing equipment.

The second “innovation” is the application of a new approach to the equipment purchase, which provides for the repayment of 50% of the total cost of the equipment at the time of its delivery and repayment of the remaining amount in equal parts, over the next 5 years. This approach allows municipality to reduce the risks associated with defects, malfunctions, possible failure of the purchased equipment due to factory defects.

From March to June 2019, as part of a new project in Yerevan, 652 old lamps were replaced with 368 new LEDs, which reduced the energy consumption of street lighting systems in Shirak and Arno Babajanyan streets, as well as the Kyiv Bridge by 372 MWh / g and reduced greenhouse emissions gases in the amount of 150 tCO2 / g.

The next stage of the large-scale modernization program is the replacement of fixtures in two districts (Davidashen and Nubarashen) and six streets (Alabyan, Kievyan, Asratyan, Leningradnya and Hakobyan). In particular, it is planned to replace 3299 old luminaires with 2412 new ones, reducing energy consumption by 1315 MWh / g and reducing greenhouse gas emissions by 531 tCO2 / g.

The municipality has already begun the implementation of a new stage - on December 26, 2019, the fixtures on the Davidashensky bridge were replaced (see the attached photos).

Thus, thanks to the joint efforts of the city administration and UNDP, the total energy saving in the street lighting system in 2020 will reach about 3,000 MWh / g, which is equivalent to the annual energy consumption of about 1300 households in Armenia, and the reduction of greenhouse gas emissions will be 1268 tCO2 / g.

In addition to the aforementioned results, the municipality managed to improve significantly the quality of illumination of all pilot streets and sidewalks, ensuring compliance with current standards, and as well improve traffic safety.

In addition to already completed as well as planned work, in 2020, the Yerevan Municipality intends to improve pedestrian safety by providing dedicated LED lighting to 72 unregulated pedestrian crossings.