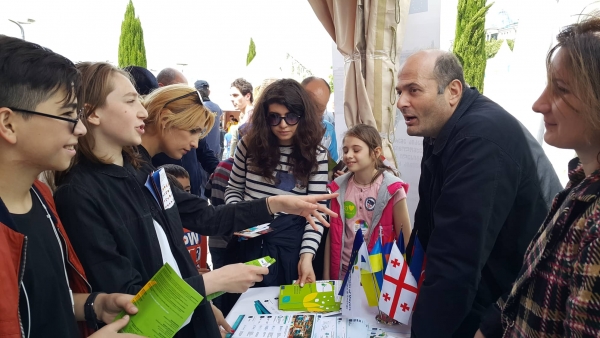 With the aim to raise the people’s awareness about the Georgia-EU relations this year the Delegation of the European Union to Georgia together with 20 EU member countries` embassies and other partners, organized the Europe Day celebration events in Tbilisi.

On May 5 the territory of Rike Part in Tbilisi became the main arena of Europe Day 2019 events bringing together more than 15,000 people. This year's Europe Day was held under the motto "Stronger Together" to highlight the strong relations between Georgia and the European Union. 2019 is a double anniversary, marking 10 years of the Eastern Partnership and 5 years since the signature of the EU-Georgia Association Agreement.

The event was officially opened by Salome Zourabichvili, President of Georgia, Mamuka Bakhtadze, Prime Minister of Georgia, Kakha Kaladze, Mayor of Tbilisi and the Ambassador of the European Union, Carl Hartzell. During his opening speech, Ambassador Hartzell remarked, " It is also an opportunity for us to highlight the close relations between the EU and Georgia, which have never been stronger than they are today. We look forward to continuing and further developing our cooperation in the years to come.“

Alongside with cultural and entertainment programs, contests, sports activities, Tbilisi citizens and city guests had the opportunity to get a firsthand information about the EU supported ongoing projects in human rights, civil society development, economics, agriculture, education, environmental, etc. spheres.
Europe Day was closed with live concert and fireworks over the Peace Bridge, lit up in the colours of the European flag.

CoM East local team presence at the event was a good opportunity to speak directly to citizens about CoM, its objectives, provide necessary information and make them understand and appreciate the benefits of SECAP implementation at local level, present projects implemented in Tbilisi and other CoM cities which will not only benefit to the fulfillment of obligations undertaken by the city but will improve life conditions for its citizens making it more comfortable and resilient.