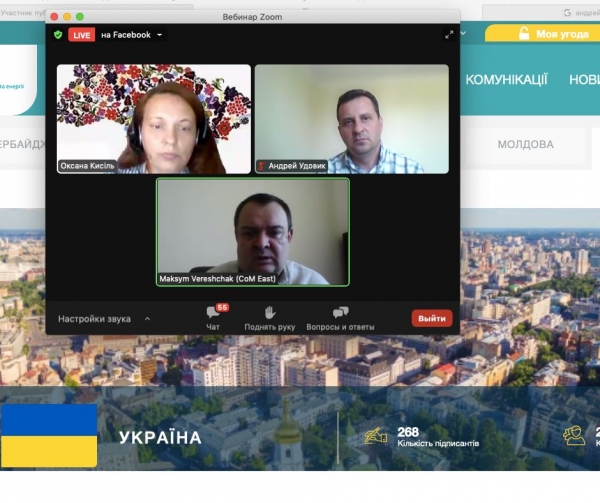 Restoration of the functioning of critical infrastructure of communities

On 19 May 2022, the Covenant of Mayors - East project, with the support provided by the Ministry of Communities and Territories Development of Ukraine as the National Coordinator of the Covenant of Mayors, organized the event for Ukrainian communities entitled “Planning to restore the functioning of critical community infrastructure: public buildings” with 216 participants taking part in it, more than 170 of them were representatives of communities.

During the event, such topics as regulatory and legal regulation regarding the inspection and implementation of priority works for the restoration of damaged objects, governmental support of communities in the restoration of public buildings, sources of financing and the importance of developing and sustaining the energy management system at the community level were discussed.

In his speech, Mr. Vasyl Lozynskyi highlighted the following: “We all absolutely understand and say that we will restore, rebuild and develop Ukraine not as it was, not according to old standards, but we will do that with understanding of new requirements, new standards and with a far-sighted view of the future. There are already certain development plans for Ukraine and funds from the European Union. Undoubtedly, they will go faster, easier and more comfortably to places where the experience of the European Union is taken into consideration and the energy efficiency requirements are many times greater than ours, even today. We, as the relevant Ministry, will definitely support this! We clearly understand politically that energy efficiency is another tool to win this war, that is, one way or another, ideally to give up using Russian gas. This is a challenge not only for Ukraine, but it is also a challenge for Europe, so we must act together! And without our fellow energy managers, we will not be able to do this as quickly as the time requires!”.

The event was also supported by the EU Delegation to Ukraine. Ms. Olha Borodankova, Head of the energy efficiency sector of the EU Delegation to Ukraine, informed the participants that the Head of the European Commission, Ms. Ursula von der Leyen, announced that the European Commission will provide Ukraine with a new package of macro-financial assistance worth 9 billion Euros, which indicates the large-scale support of the European Union and the creation of the platform “Rebuild Ukraine” aimed at restoring the economy and infrastructure, these will be grants and loans.

Support of internally displaced people, meeting their social needs and restoring homes, are significant aspects of the EU's assistance. A new initiative from the Energy Efficiency Fund is anticipated in the area of energy efficiency, and the “Energodim” programme is still in operation.

Ms. Olha Borodankova emphasized the importance of decentralization and the role of communities in the restoration of Ukraine: “The role of self-government has become even greater. In this full-scale war, the mayors of the cities showed themselves on the best side. In many parts of Ukraine, the enemy did not come thanks to the unity of cities and their residents, and the heads of communities showed that they are with the people. This shows that the local reform, the decentralization reform that the European Union supported in Ukraine, was done correctly and on time. And if cities were able to prove themselves in wartime, it means that in peacetime their role will become even more important. You have accumulated such capital, which will simply need to be directed to the restoration and development of your cities and the country as a whole!”.