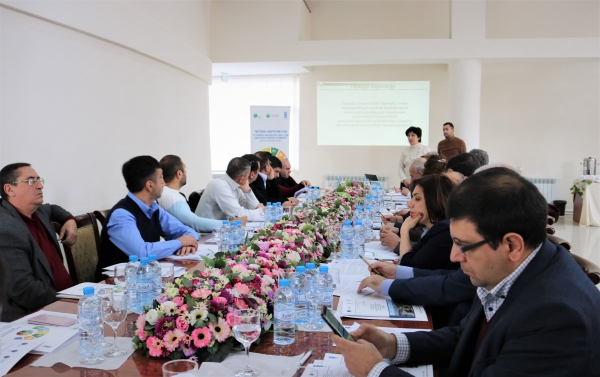 Armenia: Presentation of the Gavar Sustainable Energy and Climate Action Plan within the framework of working session regarding climate change and adaptation issues

“Climate change vulnerability and adaptation: example of Gavar” working session took place on December 3 in Gavar. The event aimed at discussing climate change challenges and adaptation opportunities of the province with regional representatives, as well as presenting the example of “Gavar Sustainable energy and climate action plan” project. The event was organized in the frame of UNDP-GCF Armenia National Adaptation Plan project with the support of Union of Communities of Armenia, Gegharkunik Regional Administration and Gavar Municipality.

In his welcoming speech, Deputy Governor of Gegharkunik Narek Grigoryan stressed the importance of discussing the challenges of climate change in the region and clarifying suitable adaptation measures, as well as the development of projects similar to “Gavar sustainable energy and climate action plan” in other communities of the province.

“Armenia is among countries vulnerable to climate change. Negative consequences of climate change are already noticeable in our country including among others frequent heat waves, a decrease in irrigation and drinking water resources, an increase in the number of fires in habitats and natural environments. Steps towards adaptation to conditions resulting from climate change have become a prerequisite for the country's sustainable development. In this regard, we attach greater importance to the implementation of the UNDP-GCF Armenia National Adaptation Plan project, as it will enable to identify the necessary climate change adaptation measures and incorporate them into national, sectorial and local government planning processes, contributing to the country's sustainable development, ”said UNDP-GCF Project Manager Gohar Hovhannisyan.

During the event, climate risks of Gegharkunik province, the necessity of climate change adaptation projects in communities, main obstacles and issues of implementation of such projects as well as the importance of separation of needs and demands of women and men in the project planning and implementation processes were discussed with representatives of Gavar, Vardenis, Sevan, Martuni, Chambarak community administrations as well as regional NGOs.

“Involvement and active participation of communities in the process of climate change adaptation is extremely important, as existing problems and challenges are more visible at the local level. It is a priority for us to include adaptation measures in community development plans, which we believe will significantly contribute to addressing climate change challenges”, said Natalia Lapauri Director of the Union of Communities of Armenia.