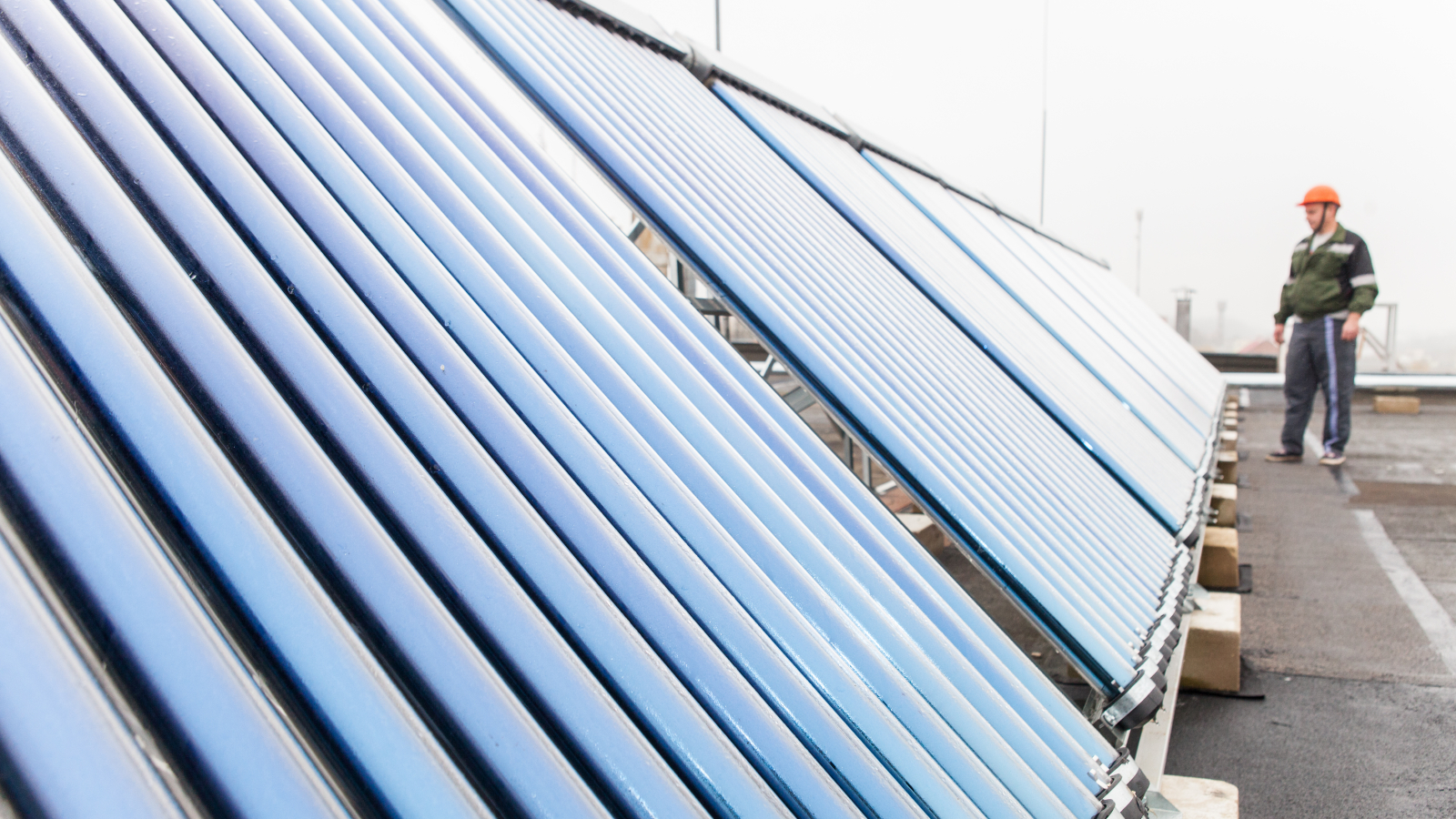 How do regions reduce greenhouse gas emissions and what is the economic effect?

By joining the EU initiative ‘Covenant of Mayors for Climate and Energy’, Belarusian regions are innovating and improving their energy efficiency. But what did the modernisation of the public baths in Hlybokaje and the boiler facilities in Brest mean for the cities?

Hlybokaje: A pilot facility for the use of solar energy

Hlybokaje has a population of 19,000 and is located 176 km north of the Belarusian capital of Minsk. Hlybokaje is known for its nature (the town itself boasts five lakes, while the district has a total of 106 lakes) as well as the international Cherry Festival. But this year, the inhabitants of Hlybokaje gained another attraction.

“A visit to the city baths is a break, a meeting with friends, a chat. I have been going to baths since I was eight years old,” said local resident and forestry engineer Leanid Kornyshau. “Recently, I also introduce my nephews to it. Previously, the word ‘bath’ was often used in a negative sense. When someone wanted to end the argument, they said: ‘Go to the bathhouse!’ But now, more and more often this expression has a positive meaning.”

When solar panels were installed on the roof of the building a year ago, some locals doubted whether solar energy could replace natural gas.

“Now, Hlybokaje residents view the city baths as an innovative feature. And, probably, the inhabitants are even proud that there is such a thing in their town and not in the neighbouring towns,” said Sierhei Kashmila, Chief Engineer of the Housing and Communal Services of Hlybokaje District, who also has been going to the town’s baths since childhood.

An EU grant of around €41,000 was the main funding for the energy modernisation of the facility, which was completed at the beginning of this year. With the help of these funds, the water in the baths started to be heated by solar energy instead of gas. A solar power system consisting of 20 solar panels was installed on the roof, and a heat pump was provided for cloudy days.

According to Sierhei Kashmila, this will reduce emissions by 335 tonnes of CO2 per year. The economic impact is equally as important for him: the cost of operating the baths will be reduced by 12%. Given that the baths must be a cost-effective facility, in the short term this will mean it is not necessary to raise the prices for visitors. The baths welcome around 190 visitors a week.

The coordinator of the local initiative on energy modernisation of the baths, Director of the local foundation ‘Centre for Sustainable Development of the Lake District Territory’, Mikhail Arekhau, said:

“The city baths have become a socially important feature in terms of increasing the knowledge of local residents about energy conservation and climate change. Excursions have been held here for schoolchildren, communal housing and service workers and builders. However, most importantly, this facility has become a pilot site in our area for energy efficiency and energy conservation. I am convinced that both private owners and the state will continue to work with solar energy.”

In Brest, a large city located 344 km west of Minsk, three boiler facilities were modernised in 2018. The facilities are responsible for heating the medical centres (a regional hospital, a clinic and dormitories) and administrative buildings.

“Modernisation of this kind was carried out in Brest for the first time,” said the coordinator of the local initiative, Aleksandr Delisevich, who now works as the Chief Specialist of the economy department of the Brest Regional Executive Committee.

The majority of the modernisation budget, almost €43,000, was contributed by the EU. Two highly efficient condensation-type boilers using existing solar panels in the circuit were installed in two city boiler facilities located on Ordzhonikidze Street and Krasnogvardeyskaya Street.

“The boilers still work on gas, but now they are more efficient. In addition, now the water gets heated by solar panels, which did not happen before due to design errors. Greenhouse gas emissions will be reduced by 16.9 tonnes per year,” said Aleksandr Delisevich.

The heat exchanger was replaced in the third boiler facility located on Meditsinskaya Street. Since this boiler facility is more powerful, CO2 emissions will be reduced more significantly, by 222 tonnes per year.

Following the reduction in gas consumption, the modernisation of boiler facilities led to a reduction in the cost of energy production.

“That means the heat producer has more money left for further modernisation. In the end, this can lead to lower prices for consumers,” said Aleksandr Delisevich.

As part of the EU initiative ‘Covenant of Mayors for Climate and Energy’, local governments are voluntarily committing to reduce greenhouse gas emissions by at least 30% by 2030. This commitment will be realised by facilities that are subordinate to the city executive committees and district executive committees: healthcare, education, housing and communal services, etc.

The EU has allocated about €660,000 for the implementation of the project ‘Support of the Covenant of Mayors Initiative in Belarus’ in 2016-2020, said Yuliya Yablonskaya, Head of the International Public Association ‘Ecopartnership’. The modernisation of facilities in Hlybokaje and Brest are examples of investments in innovative ideas.

The project ‘Support of the Covenant of Mayors Initiative in Belarus’ aims to attract new cities and regions to participate in the initiative. It assists local governments in fulfilling the commitments made by signing the Covenant of Mayors, and in implementing projects to help cities adapt to climate change. An important component of the project is the establishment of cooperation between the authorities and public organisations in the field of energy and climate change.

According to Yuliya Yablonskaya, the number of signatories of the Covenant of Mayors has significantly increased in Belarus over the past three and a half years. Now, there are about 50 signatories. The decision to join is made by local authorities, with a prerequisite that non-profit organisations have significant involvement in the work.

After joining the initiative, the city or region should develop an action plan for sustainable energy and climate development over the course of two years. The cities also commit to holding annual Energy Days, during which local residents learn what the authorities have committed to and how these commitments will be implemented.

facilities in Hlybokaje and Brest

“People notice that the climate is changing; for example, precipitation and periods of heat get more extreme, but they do not always understand how and why it happens. To slow climate change, it is necessary to reduce greenhouse gas emissions and the consumption of fuel and energy resources. By joining the Covenant of Mayors, signatories can find solutions based on the European experience,” said the Head of Ecopartnership.